The History of Lombardy Hall Foundation 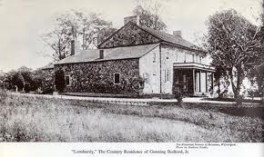 Lombardy Hall Foundation was founded in 1968 and quickly began to accept donations to renovate Lombardy Hall to establish a colonial and Masonic museum. It was able to assemble colonial furnishings and art to decorate the building. It initially served as a magnet for Masonic historical buffs from Wilmington, DE and beyond. The growing Masonic collection has resulted in only being able to display only a portion of Masonic books, art and memorabilia it has in its possession. Continued contibutions continue to make important additions to the appreciation and preservation of our historic and Masonic heritage.

The founders wanted to create an extensive collection that was accessible to the public, and actively sought to cooperate with various Masonic jurisdictions in an effort to promote the historic colonial and Masonic significance of the building and Mr. Bedford. This philosophy has proven very successful and earned the building designation on the historical register.

Where to find us

Our museum is available by appointment only. The first floor renovations are complete. For an appointment, please use the Contact link above.

Our exhibits change periodically. Have a look at our current exhibits.﻿

Get Social With Us